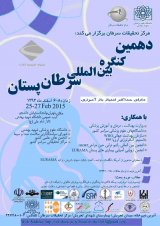 Background: MicroRNAs (miRNAs) are endogenous small non-coding RNAs. In animals, miRNAs were found to hybridize to 3’ untranslated regions (3’UTRs) and mediate mRNA cleavage or translational inhibition. These kinds of RNAs are important class of regulators that were reported to beinvolved in a wide range of biological processes such as cell signaling and cancers. Genetic polymorphisms, especially single nucleotide polymorphisms (SNPs) can affect miRNA regulation via different molecular mechanisms and associated with various phenotypic differences. First,polymorphisms within precursor miRNAs (pre-miRNAs) were found to affect miRNA expression possibly via altering pre-miRNA processing. Second, polymorphisms in miRNA target sites had been extensively studied and implicated in a variety of human diseases. There are over 100 different types of cancer, and each is classified by the type of cell that is initially affected. Breast cancer is a type of cancer which malignant cells form in the tissues of the breast. According to the World Health Organization, breast cancer is the most common diagnosed cancer in women.Objective: the aim of our study is to expand current knowledge about molecular function of miR-499 and its SNP as a potential biomarker in breast tumor cells by using bioinformatics tools. Material and methods: dbSNP in NCBI, miRNASNP, UniGene, KEGG and DAVID databases wereused for bioinformatics analysis. Validated and predicted targets of miR-146a were obtained from miRtarbase and miRwalk databases. Patterns of targetome genes expression in breast tumor and normal mammary glands were investigated by Unigene database. DAVID database was used for miR-146a enrichment analysis.Results and conclusion: Our data manifested KEGG signaling pathways pathway in cancer as the most statistical relevant pathway with miR-146a targetome. miR-499 in breast tumor cells may target angiogenesis related mRNAs such as KITLG, FGF, PDGFR, SOS, STAT3, IKK and iNDS. Stabilityreduction of stem-loop structure of mir-499 due to G allele gains angiogenesis pathway. As a result allele G may associate with poor prognosis of breast cancer. To sum up, miR-499 is a potential tumor suppressor miRNA which could be used as a worthwhile prognostic biomarker. Allele G in the SNP could have prognostic value for breast cancer centers due to its effect on mir-146a stability. The exact role of mir-499 and the SNP needs further investigation.