Management of Children with Wilms tumor in developing countries: the value of preoperative chemotherapy upon upfront surgery 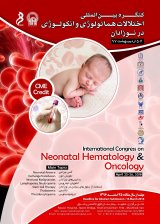 مشخصات نویسندگان مقاله Management of Children with Wilms tumor in developing countries: the value of preoperative chemotherapy upon upfront surgery

Background: Wilms tumor, also known as nephroblastoma, is a cancer of the kidneys that typically occurs in children. although it is a malignant tumor, it carries a high cure rate if the management is proper. Still there is a debate whether upfront nephrectomy followed by chemotherapy/radiotherapy, or preoperative chemotherapy followed by nephrectomy and then adjuvant chemotherapy, is the best management. In this study we retrospectively reviewed our data during the last 4 years for all children with Wilms tumor treated at our center. Methods: the study was conducted from March 2014 till January 2018. All the cases with Wilms tumor treated at Imam Hussein Cancer Center, Kerbalaa governorate-Iraq, during the study period were enrolled. Details of their initial evaluation and therapy, resection and pathologic findings, and follow-up were retrospectively reviewed. Results: Seventeen patients were enrolled in this study, 10 were females; their ages ranged from 0.7-9 year (with a median age of 3 year). Two patients were excluded as they abandoned treatment. Staging were as the follow: stage I, 6; stage II, 1; stage III, 5; and stage IV, 3. Initial biopsy were done in 2 patients only. Nine children were treated with preoperative chemotherapy for 4 weeks. Six patients underwent upfront nephrectomy, 2 of them have had intraoperative tumor rupture, one has had residual tumor, and operative data were lacking in 3 patients (i.e., unknown complications). Regarding histopathology, 12 patients have had favorable histology, one has had focal anaplasia, one has had mesoblastic nephroma, and another one has had cystic partially differentiated nephroblastoma. Recurrence were documented in 7 patients, 4 of them were treated with upfront nephrectomy. Conclusions: Neoadjuvant chemotherapy allowed for complete resection of the tumor with lower risk of intraoperative tumor rupture. We advocate for early referral to a pediatric oncologist for better evaluation and starting with preoperative chemotherapy to decrease the risk of intraoperative complications that may lead to unnecessarily more intensive chemotherapy as well as radiotherapy and lowering the cure rate.