Non-carcinogenic health risk assessment induced by paraquat in some streams, wells and drinking water in Guilan province, the Northern Iran 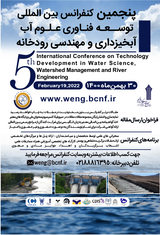 During rice farming season (May-July ۲۰۱۸ ) in Guilan province, Northern Iran, the quantities of special kind of herbicide, Paraquat, were investigated in water samples gained from a river passing across six resources. Paraquat was identified in practically all of the sampling sites in this investigation, with an average concentration of ۱۹.۹۲ 𝜇𝜇g /L and ۳۷.۳ 𝜇𝜇g /L as the highest amount. Due to the lowest precipitation and the maximum evaporation rate in the stream, July presented the highest rate of the herbicide concentration. For exposure levels and health impacts being throughly assessed, the chronic daily intake (CDI), the hazard quotient (HQ), and a hazard index (HI) value PQ have been determined. HQoral, in the sampling, ranges from ۰.۰۱۷۶ to ۰.۲۰۲۲. As compared, HQoral for the youth is ۰.۰۰۷۸, whilst HQoral for adults comes between ۰.۰۰۷۸ and ۰.۰۹۳۳. What is more, a hazard index (HI) value was generated to evaluate the potential danger to the dwellers. The investigation revealed the paraquat range in drinking water samples was higher than the EPA and WHO regulations and guidelines.To illustrate, W-Sepidrud River > W-Well۲(on rice fields in Ziyabar) > W-Well۱(on tea gardens in Fuman) > Pirbazar River > W-Tap were reported to have the highest mean CDI oral PQ concentrations in adults. The total hazard quotient (HQoral + HQdermal) and hazard index values were found to be lower than the permitted level in the health-risk estimation. Additionally, the results of total THQtotal risk by comparing ingesting versus dermal contact revealed that ingestion was the most prevalent of all. Despite the fact that the results demonstrated a low risk, some issues are raised about the implications of long-term stream exposure to people, particularly children, which could adversely damage their quality of life. Paraquat, as a "Group E" chemical, is accepted by the US EPA, indicating that it is not a human carcinogen (US Environmental Protection Agency, ۱۹۹۷.) which accordingly doesn't cosider cancer risk as a major concern. The main conclusion derived from the study is that drinkable water used for sampling is projected to be main origion of lead exposure, putting consumers in various city sites at risk of severe health impacts, necessitating further research and organized countermeasures.